Navigate back to the homepage

Announced on their blog on March 31, 2020 by co-founder Adam Grossman: Dark Sky has joined Apple.

Unfortunately, this is not an April Fool’s joke that went out a day early.

While touted as “important and exciting news”, it’s a message that is definitely more “important” and less “exciting” for Android and WearOS users; the app has already been pulled from the Play Store, and current users will only retain use until July 1, 2020. On top of this, they are no longer accepting new API users, and the API will be shut down for good at the end of 2021.

Avoiding the political and business discussions surrounding what was most likely Apple’s decisions to do this, the question remains: What are Android users to do?

Originally founded to focus on wind reporting, Windy has expanded into an incredible powerhouse for weather reporting.

To put it bluntly: Windy blows DarkSky out of the water.

Update [Apr. 2, 2020]: Windy.com has been in touch to let me know that they also offer an API that allows developers access to Point Forecast for a flat fee. More details can be found on the Windy API page.

Seriously. It’s unfair to compare the two apps, because Windy makes DarkSky look like a child’s toy. The accuracy and depth of information provided is second to none.

Best of all: It’s free, always has been, and from the looks of things, it always will be.

Where does Windy get its data

Update [Apr. 2, 2020]: Windy.com has been in touch to inform me that they also use many other weather models, namely ECMWF, which is costly but provides amazing resolution; the North American Mesoscale Forecast System (NAM) for the contiguous United States; and AROME, NEMS produced by meteoblue, and ICON for continental Europe. They also pull environmental data from Copernicus and NASA

Below is a map showing the regions covered by each system, as well as the global models used. 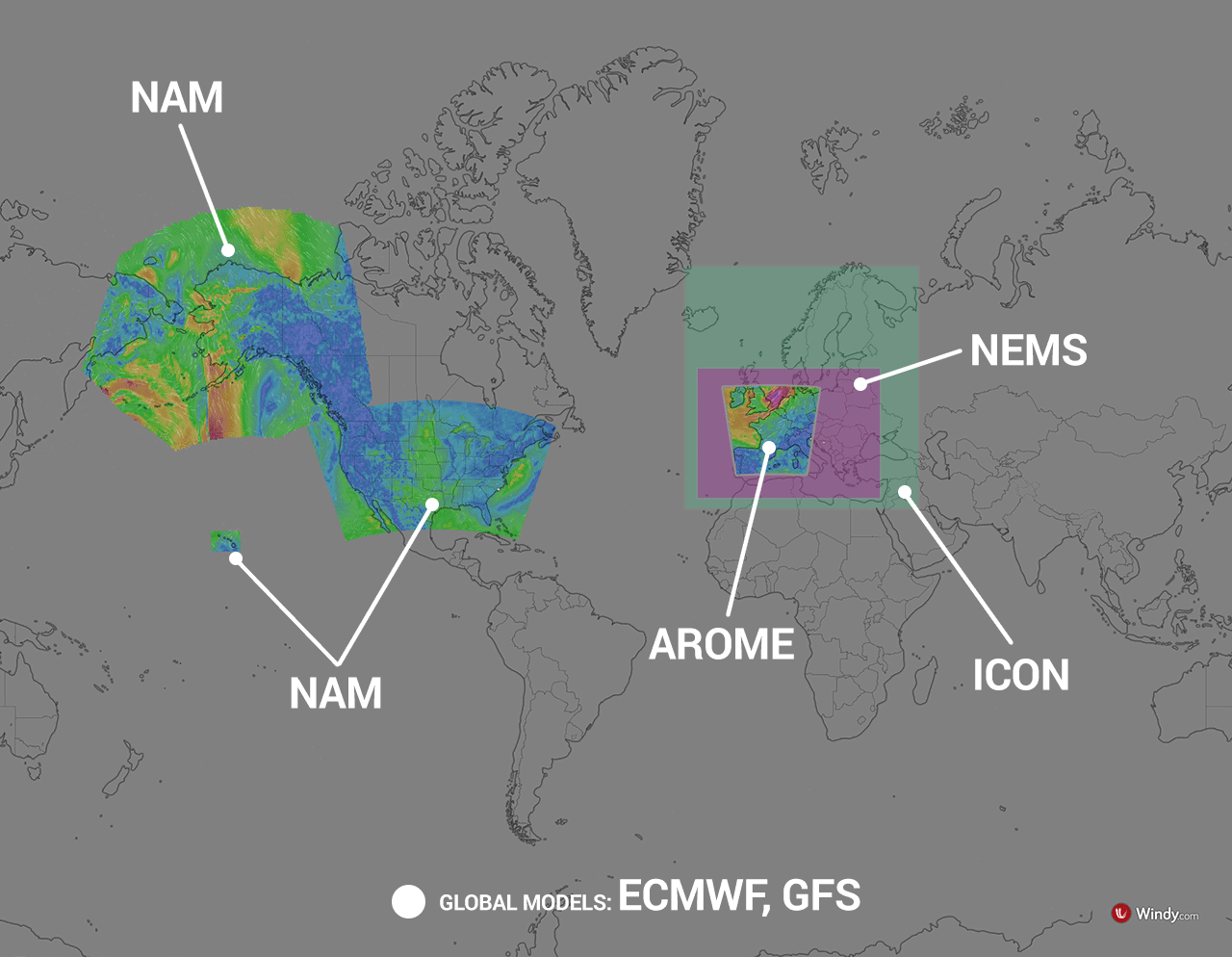 In addition to pulling data from the Global Forecast System (GFS), Windy draws its data from meteoblue, a Swiss company originally started in 1984 at the University of Basel in cooperation with NOAA.

Unlike DarkSky, they pull in data from a much wider range of sources, and their analysis and modeling goes much deeper. From meteoblue:

Since early 2007, the meteoblue computer cluster is daily-computing high resolution forecasts for Europe, Africa and South America; and since 2008 also for Southeast Asia. In 2013, we have added India, New Zealand and a Global forecast. For other areas, regional models and NOAA/NCEP GFS model runs are processed to generate information covering the entire world.

If you want to dig into the technical side further, check out meteoblue’s Data Sources and their Verification of Simulations.

Their offerings are also extremely generous and full featured, for free. meteoblue offers the following on a global scale:

Compare this to DarkSky, who only pulls their data from the NOAA’s US-based radar systems. From their kickstarter:

The National Weather Service operates an array of over 140 doppler radar stations throughout the United States, and generously provides the data free to the general public (For more information, check out their site).

Our servers pull in this data, process it, clean it, extract velocity data, and convert it to the animations you see in the above video.

Needless to say, Windy’s data sources are global, and they have a constant feedback loop to verify, refine, and keep their data and models as high-performing and accurate as possible. So maybe it’s a blessing in disguise DarkSky is making this change!

On the note of DarkSky, in their kickstarter they mention other weather apps:

So maybe we shouldn’t be so surprised by this after all.

Where did Windy come from?

Windy is the brainchild and passion project of Ivo Lukačovič, a Czech entrepreneur who describes himself as “an addicted kiter, helicopter and jet pilot who seeks the wind, waves, METARs and powder snow almost constantly.”

Our goal is to provide the best weather forecasting service in the world.

With a passion for programming, he founded what is now Windy (originally called Windyty) in 2014, and has grown the company into a small but powerful entity in the six years since then. A brief timeline of the company from Ivo himself:

Where to get Windy

Windy is available on both the Google Play store and the iOS app store.

Update [Apr. 3, 2020]: I’ve been in touch with someone from the Windy team who has informed me that there is a copycat product called “Windy.app” - be sure that you are downloading the Windy.com application with the logo that matches their logo at the top of the article.

The latest in strategy & marketing.

Come join the conversation and be the first to find out about all the new and exciting projects and resources I'm building for you all.

No spam, no promos, no bullshit.

Analyzing and Beating Your Competitors with SEO

Do you want to get a leg up on your competitors with your SEO? Give them an audit, use it for yourself!

Keyword analysis is one of the cornerstones to an effective SEO audit. Learn how to review your keywords and target winning ones.